Skip to content
One-Two Shots - The Art of Dina M

Squirrel Girl is one of my fave superheroines ever. This is based on her first solo series, The Unbeatable Squirrel Girl, where (the Marvel version of) Ratatoskr, the squirrel from Norse myths mind controls a bunch of people to become violent and angry. Squirrel Girl manages to resist, and saves the day… But what if Ratatoskr had realized that you can’t beat SG by normal violent means and decided to shift gears instead…?

This pic got banned from DeviantArt because they claimed I was “showing underage characters in sexual situations.” I tried to point out that this is VERY PLAINLY based on the solo series where  SG is specifcally said to be 21 and in college,  but my appeal fell on deaf ears. Oh well… here she is in all her bare-breasted glory. 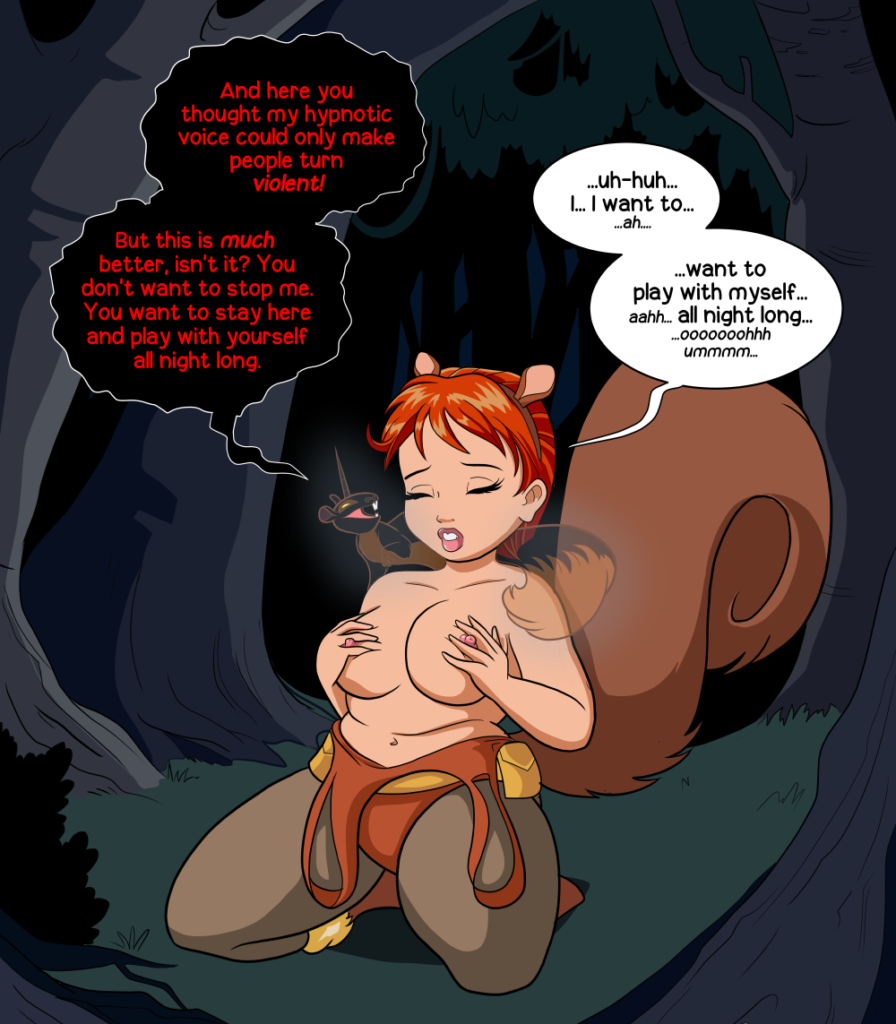 This was one of my first hypno-themed fan comics… you can even see that it was before I designed my Dinacomics font; the font here is called “Be Kind To The Earth,” Any version of Sabrina where Salem doesn’t get all the best dialogue is a waste… and yes, that includes the Netflix series. 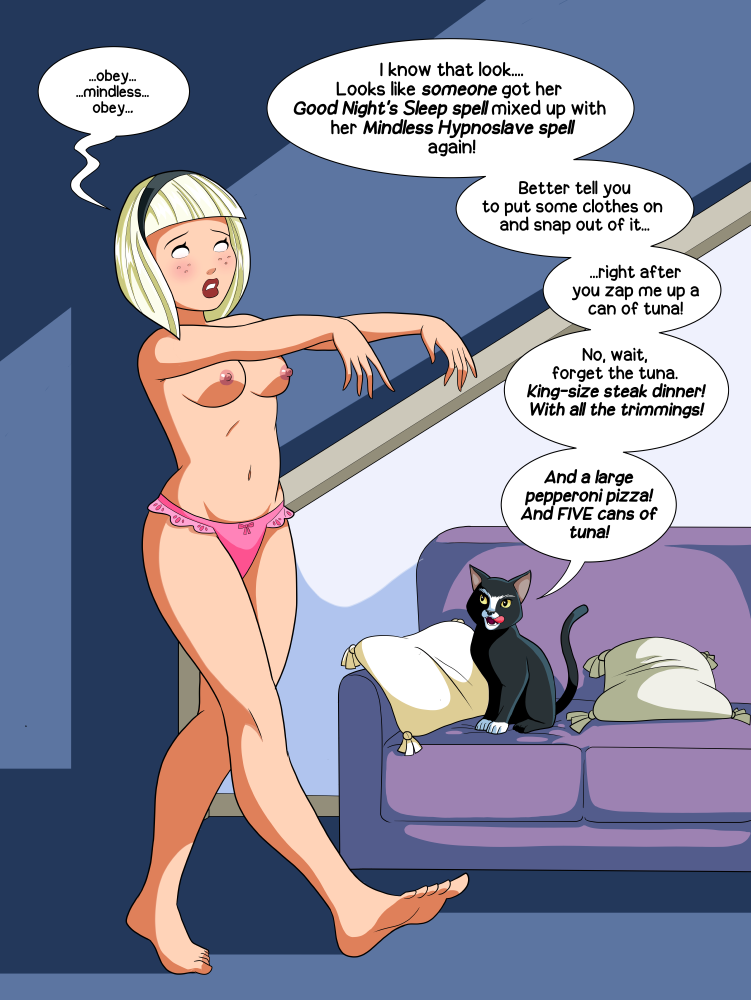 Archie Comics are famous for the Betty/Verionica/Archie love triangle… but all three of them also have several other love interests. Cheryl Blossom is by far the most risque one… she’s essentially Veronica, but richer, more bitchy, more shameless and with bigger boobs. And she has her own solution to the “Archie problem”… 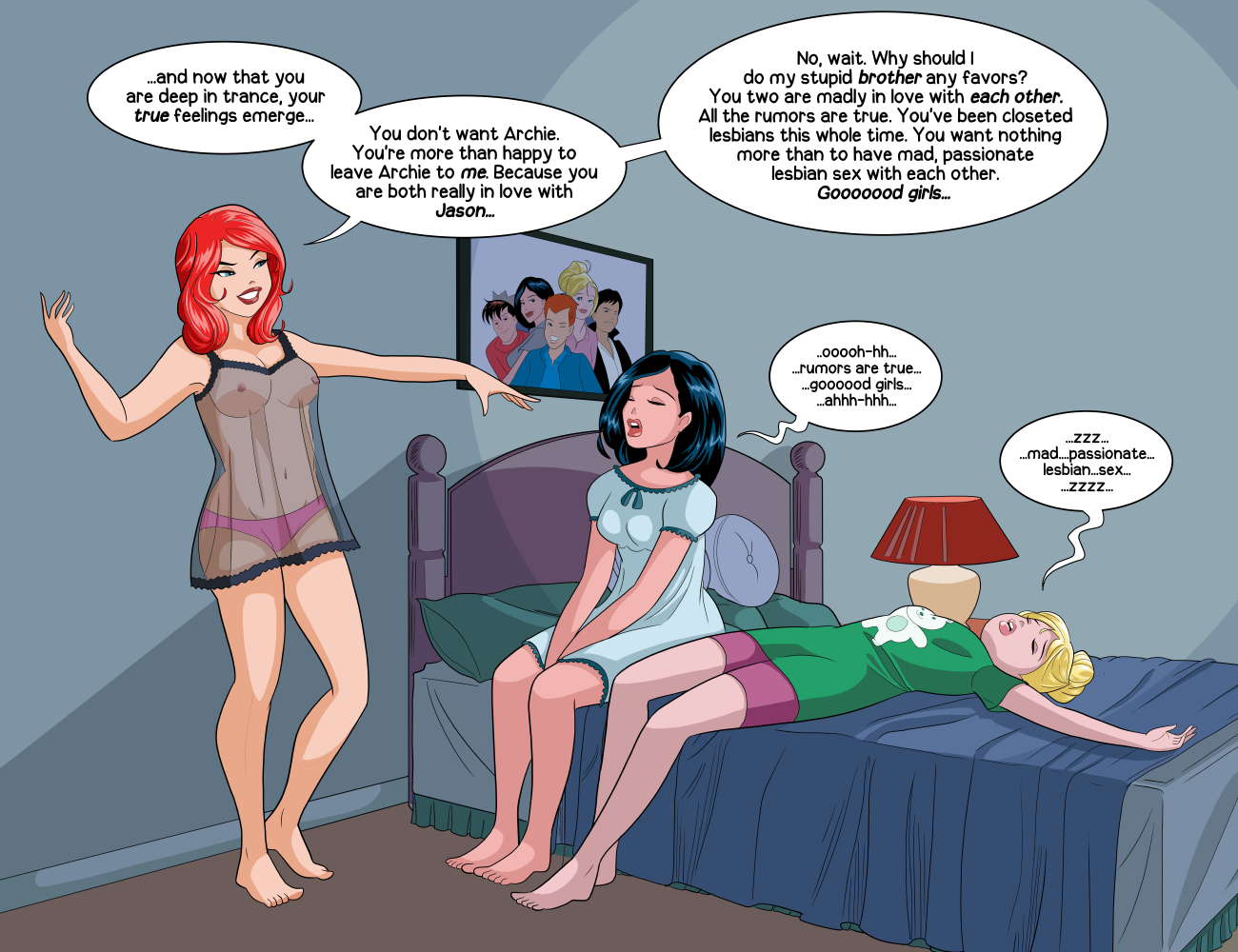 Resident Evil fans who have been into memes for some time probably know about the “Jill Sandwich” meme. For those who don’t, a brief explanation: In Resident Evil 3, one of the player character, Jill Valentine, narrowly escapes beind squashed flat by a death trap. In the following cutscene, and ine a case of hilariously cringy writing, her partner Barry says “You were almost a Jill sandwich.”  And thus, a meme was born, and lots of pictures with Jill either holding sandwiches, or dressed up as a sandwich, or being the filling of a sandwich, flooded the Internet.

I don’t play Resident Evil and hadn’t heard of the meme before I was commissioned to do this two-panel comic… but it’s kind of cute and absurdist, don’t you think? 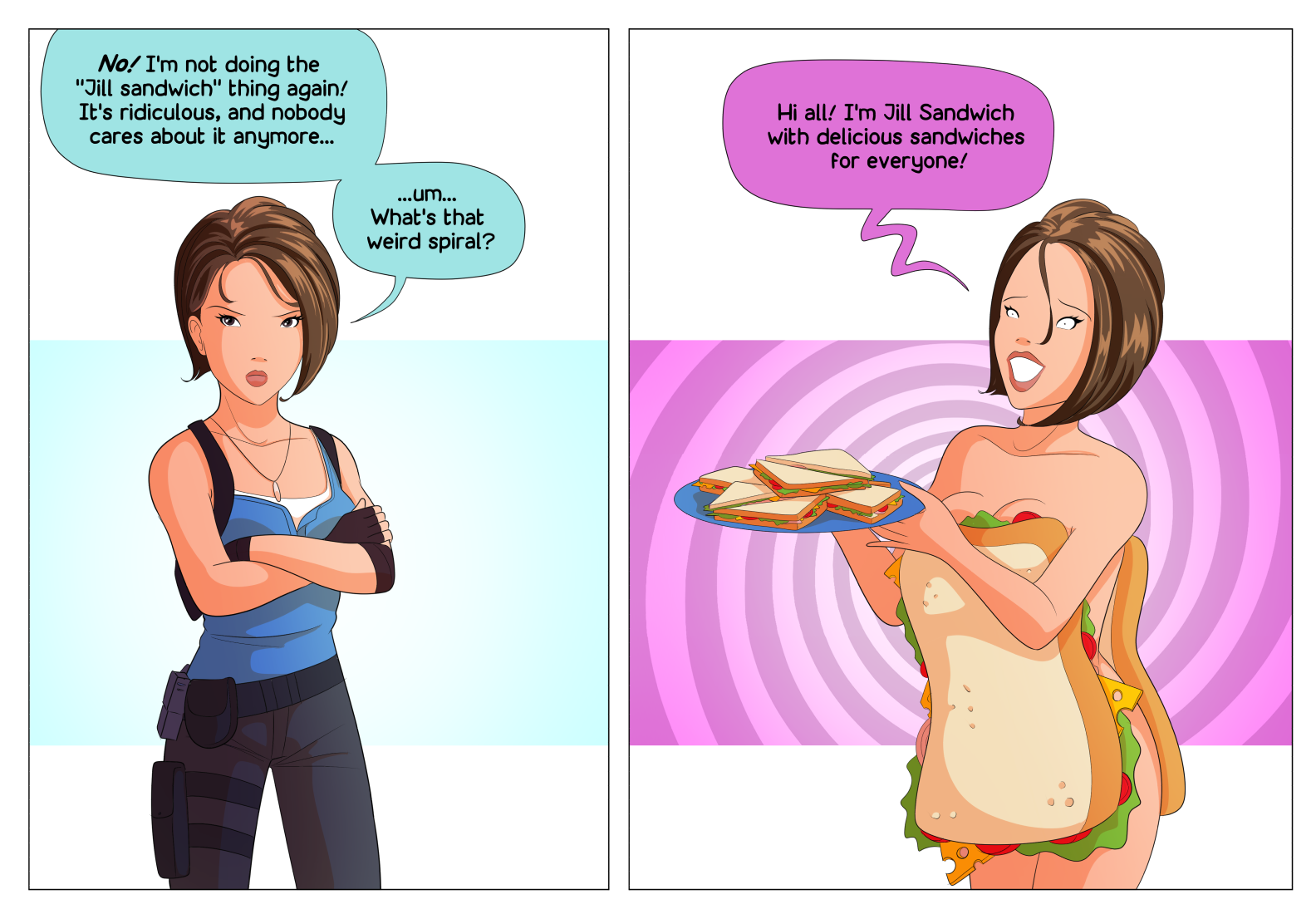 What Did You Expect?

This was essentially meant as a parody of Schweppes commercials that were shown in France… essentially there’d be something really sexual and innuendo-laden, and then it would turn out that the situation was just about Schweppes and not about sex. I’m not sure how well the joke translated to the comic, but I tried to make it accessible. THe Vulcan and the Worm

Done for one of my Royal-level Patreons, whose Vulcan OC is being possessed by another person’s OC.

I should probably mention that I have never manages to sit though an entire episode of Star Trek, in any of its incarnations, much less any of the movies… so I might not be up to date with technical jargon and such… 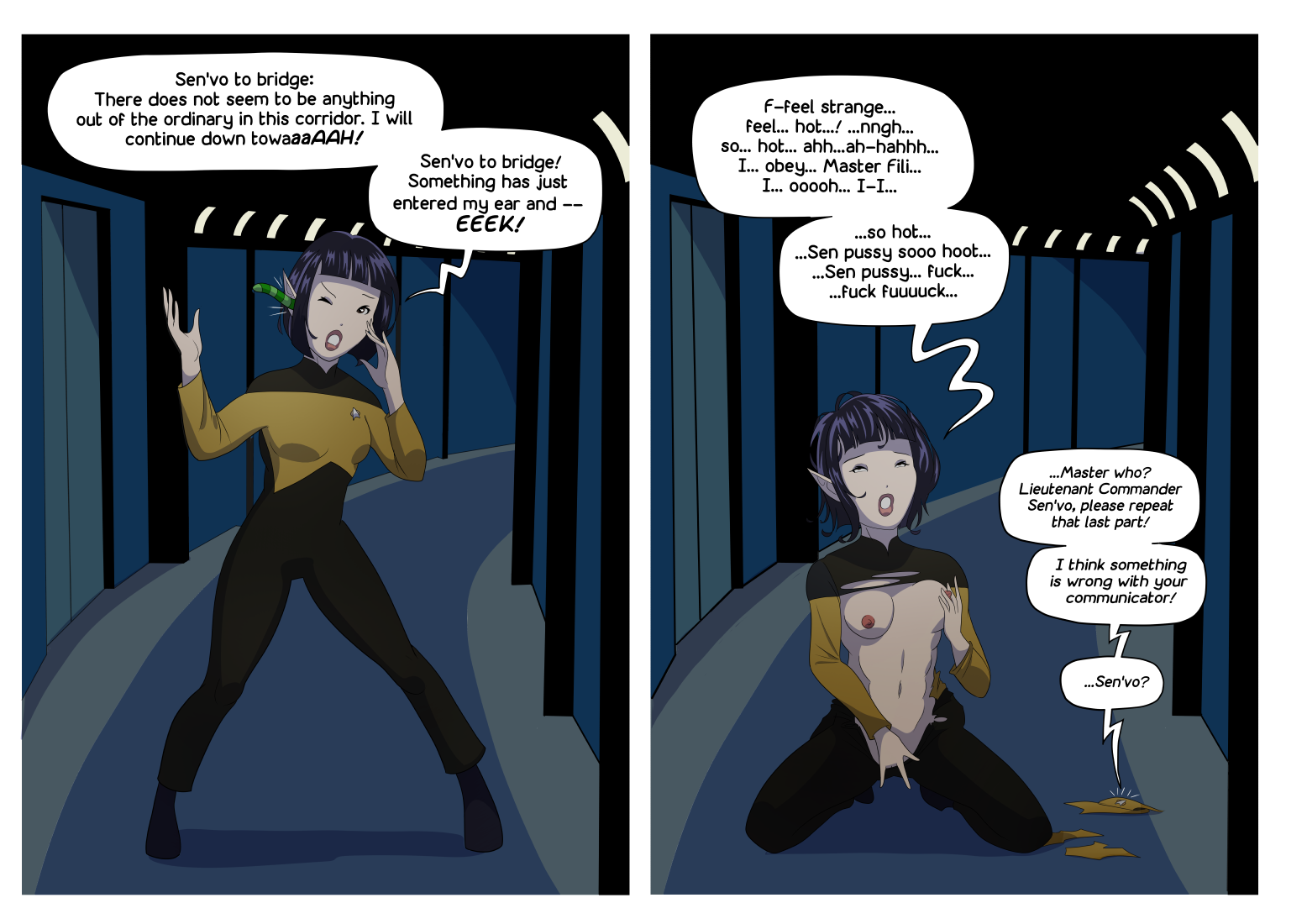 Another Patreon reward, and probably a bit of a wish fulfillment for anyone who works in retail… you might recognize the redhead too. 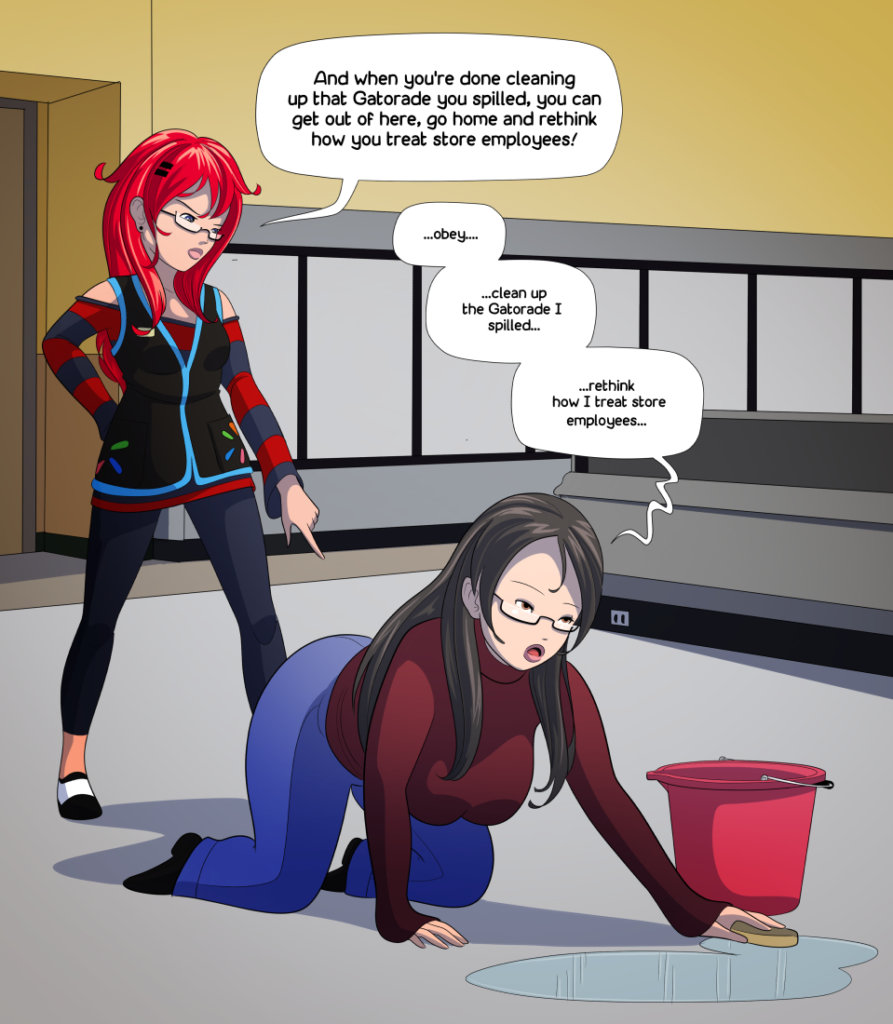 My Patrons wanted me to draw something romantic for Valentine’s Day… unfortunately, I suck at romance, so this was what they got! 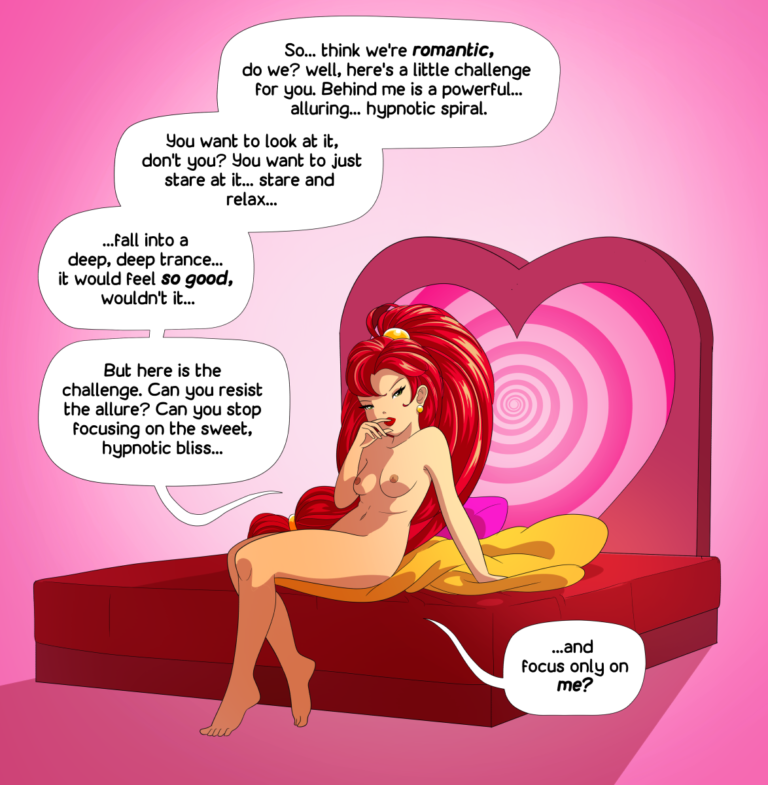 She-Ra and the Hypnotized Princesses

She-Ra and the Princesses of Power is an amazing cartoon! It has action, comedy, magic, great characters, plenty of LGBT content, and the last season had plenty of mind-control.

This scene takes place in an alternate version of the final season, where things ended up a little different… Commission! Sam and her mother wanted to make some extra cash as mannequins, but the store (which shall remain nameless here, but may have been the sort of store that a certain woman nicknamed “Vicky” may consider a secret) wasn’t quite honest in its ads… 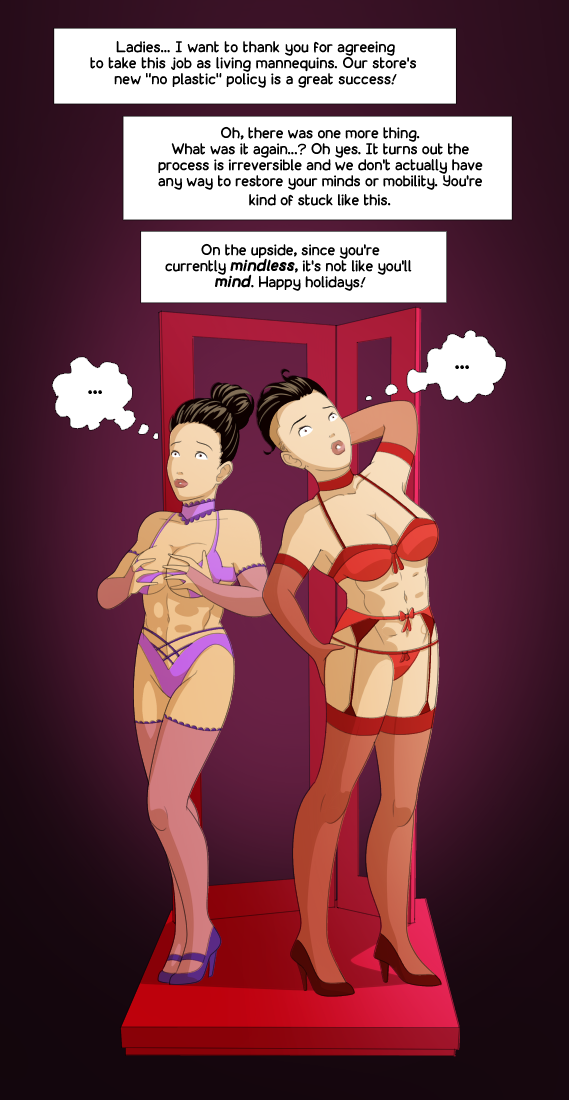 Patreon reward. The request was for something set in a cafe or coffee shop, preferably with hypnotized workers wearing only aprons. I came up with this. 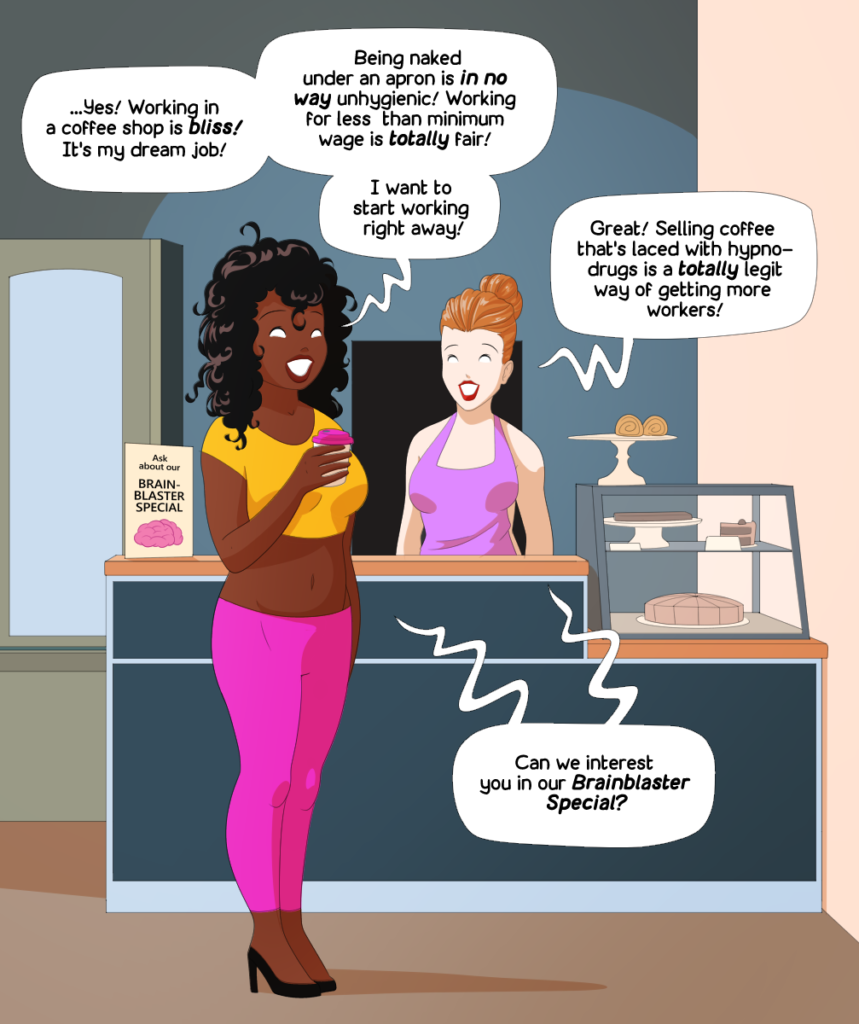 Orcs in a museum

dialogue than I probably should… 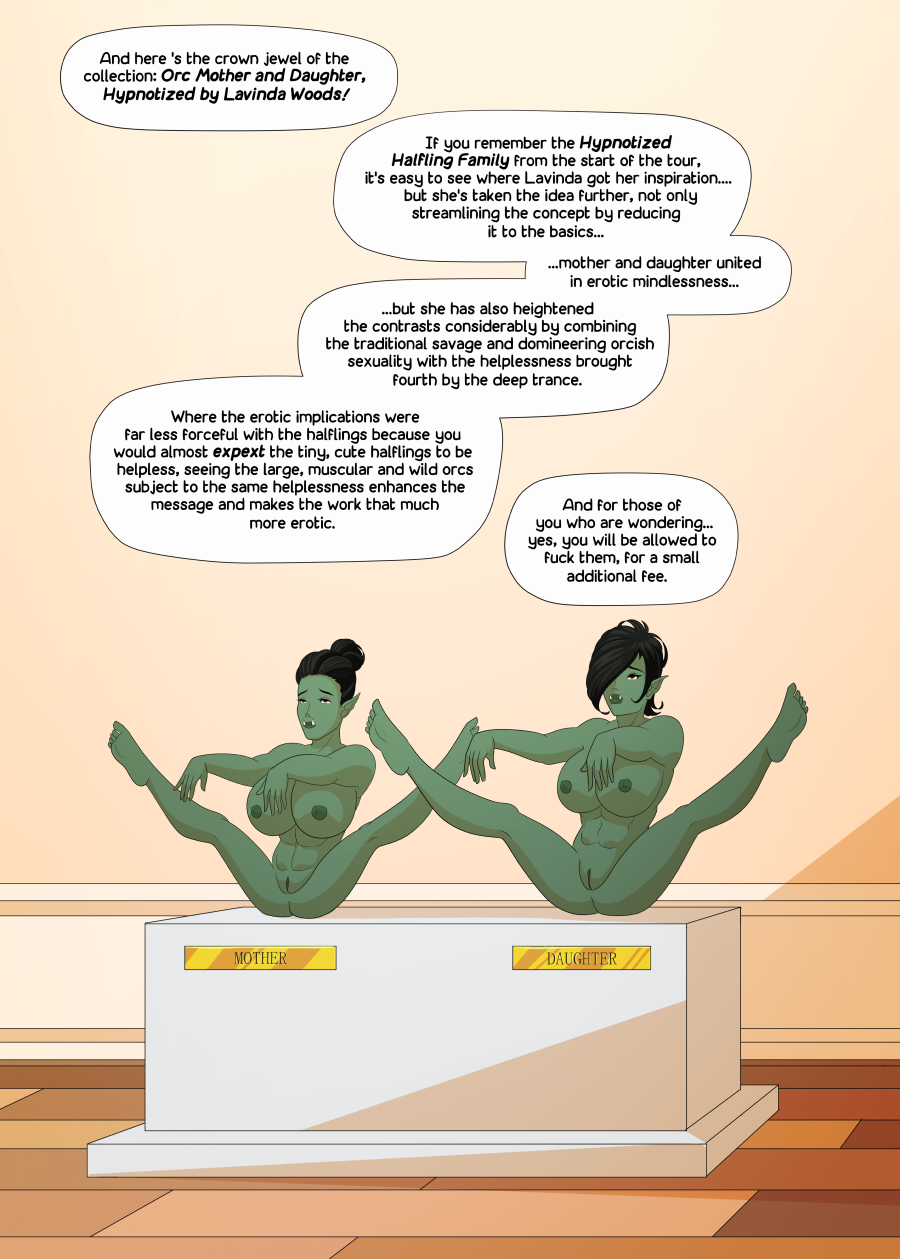 The Vulcan and the Worm II (Now With Added Andronian)

Some time after the first Vulcan and the Worm comic, the same Royal Patreon asked me for a sequel, featuring an Andronian character.

In the commentary for that first Vulcan and the Worm comic, I mentioned that I had never managed to sit through a single episode of any Star Trek show or movie… but that has changed, because Star Trek: Lower Decks is now a thing. This odd little half-parodic cartoon show seems to be rather polarizing among fans… I made the mistake of mentioning it to a die-hard Star Trek fan and HOO BOY, you’d think I had confessed to murder or something.

But I actually kind of like it. The characters are fun, and the show has certainly helped me make sense of a franchise that used to be rather incomprehensible to me, so when I drew this comic it was with a slightly better understanding of the Trek universe than before. 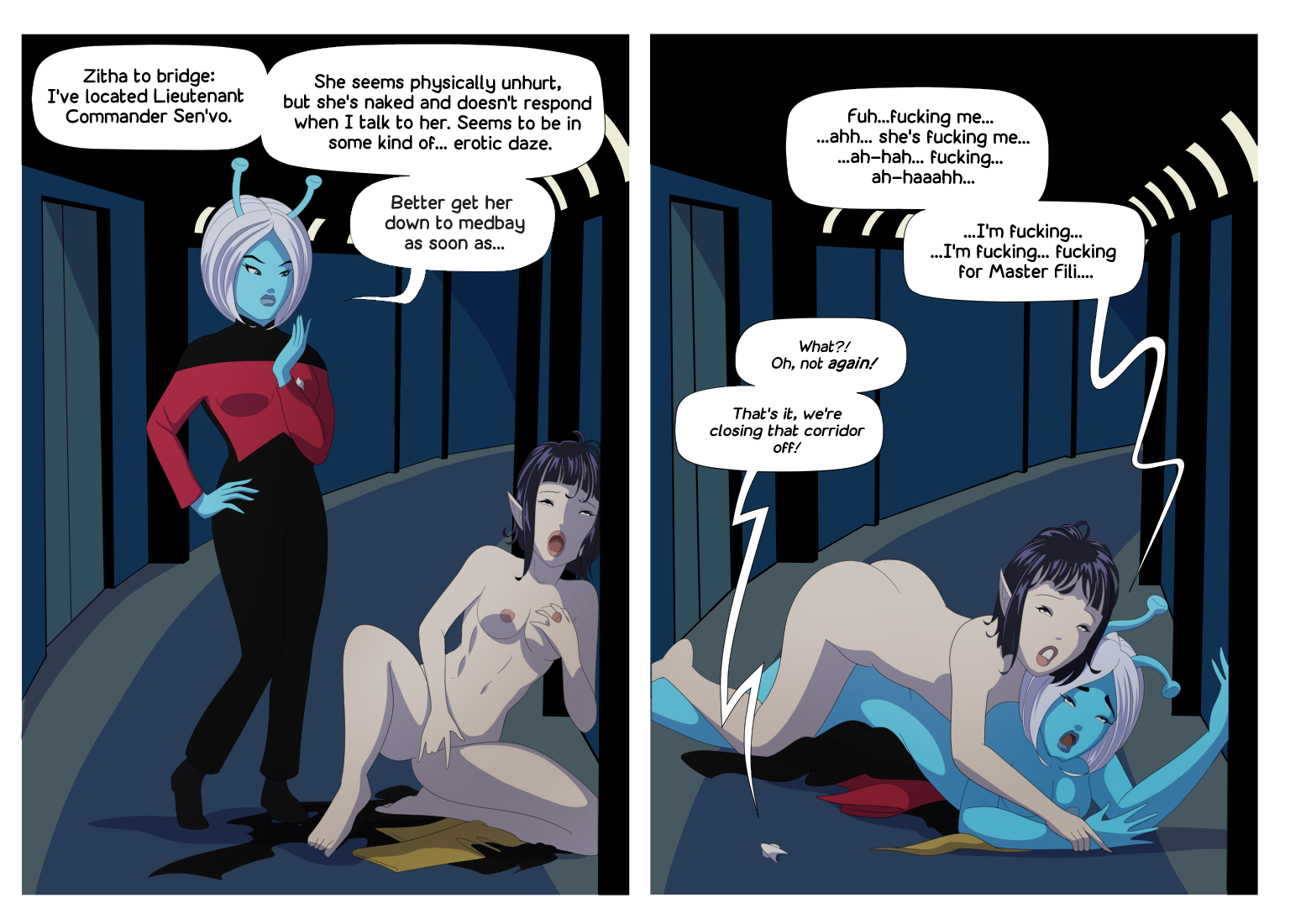 Do you know who Roxy Rocket is? I didn’t, before I got this commission. But now I know that she’s a Batman villain; a former stunt woman who turned criminal because she was bored with her job, and who rides around on a rocket, commits crimes for the thrill of it. And loves making innuendoes.

You might recognize Bogs as the man from the Hocus Pocus comic. He was no match for Winnifred there, but he can certainly deal with Roxy. 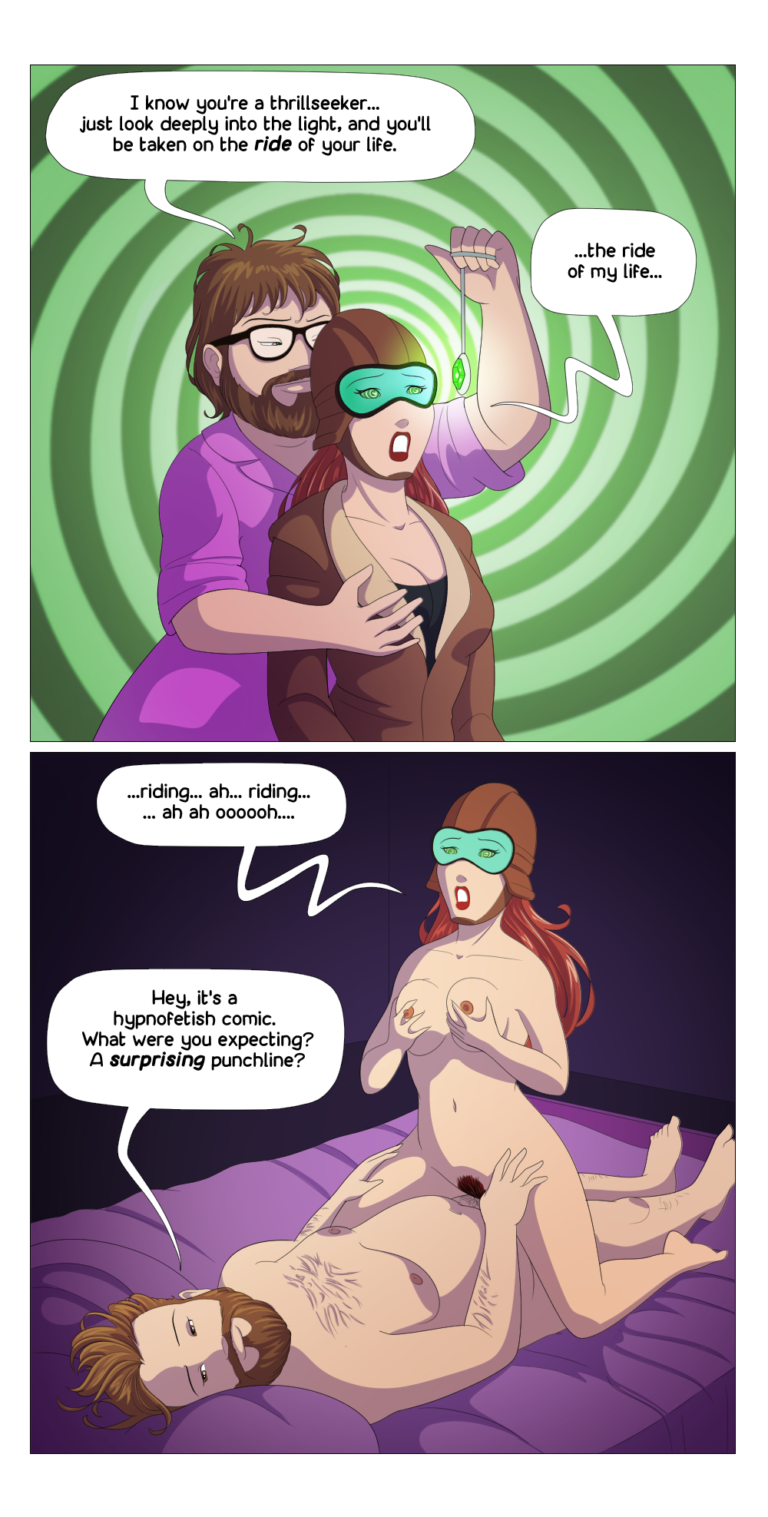