Skip to content
Characters - The Art of Dina M 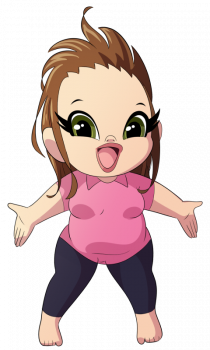 You know, one thing that always annoyed me in fiction and comics was to have a bunch of characters that I didn’t know who were… especially in fantasy books where you get dozens of chars that it’s impossible to remember who are… That’s why cast lists and character pages are so great.

So here’s a list of the more important characters that you’ll encounter in my artwork, comics and stories!

If you encounter a character in my comics not on this list, it either means their entry is pending, or they’re a one-shot character I haven’t named or developed… or most likely, they’re a crossover character belonging to someone else, in which case I’ll generally inform who they are in the comic’s commentary.

(All the characters on this list belong to me, except for twilight L, who gets a spot on the list simply because she appears so much in my comics!)

Dina M Nealey is an artist, a creator, a smart aleck. a bisexual, a bit of a slacker... and, in her chibi-form, not only the mascot of this site but also a constant victim of hypnosis and seduction.  As the avatar of her artist and essentially a self-insert character (I.e. she's me, just a cuter fictionalized version of me), she doesn't mind too much
-.
Notable appearances: The Chibi-Dina Chronicles is her main storyline, but she shows up pretty much everywhere on the site. Non-chibi version makes a few cameos in works like Hypno-Turnstyles.

Lady Vidia of the Spring Court of Faerie is an elf. Not one of Tolkien's elves or the D&D type elves or even Santa's elves, but an elf of the OLD school, from back when the Fair Folk were both revered and feared (mainly feared) by humanity. As a minor noblewoman of the Spring Court, Lady Vidia isn't particularly malicious for a Fae and finds humanity in general to be adorable... but she isn't the most moral of beings, and as the powerful sorceress she is, she often can't resist toying a little with others, because they're just so CUTE when they're helpless.
-
Notable appearances: Chibi-Dina's Hypno-Presentation, Erotic Adventures in Faerie, Mannequins, Seven Favours for Harry Potter (alternate version)

Lady Sovanna of the Spring Court of Faerie is the youngest of Lady Vidia's two daughters, and the first-born of the Children of Tomorrow (the newest generation of Fae). Sovanna is a scholar, a trainee sorceress... and the closest thing Faerie has to a pop culture geek. She's enamoured by human entertainment and is a big fan of movies, cartoons, TV, comics and the Internet. She can be a little spacey and often gets caught up in her own thoughts, which combined with her natural laziness makes her very easy to distract or hypnotize. She's probably one of the friendliest and most amiable Fae you'll meet, but shouldn't be mistaken for a pushover.
-
Notable appearances: Chibi-Dina's Hypno-Presentation, Erotic Adventures in Faerie, Genie Girl Chats.

Lady Lady Jenivah of the Spring Court of Faerie, also known by her nickname "Jenny Jump" for her ability to leap between worlds and dimensions at will (and as a reference to an obscure character from the Oz series), is the oldest of Lady Vidia's two daughters and is half elf, half human -- less powerful but more energetic and lively than her full-blooded sister. She likes to think of herself as the "sensible" member of the family.... though this sensibility comes with a curious tendency to play the "bratty teenage daughter" to her mother, even though she's long out of her teens.
-
Notable appearances: Erotic Adventures in Faerie, Mannequins, Seven Favours for Harry Potter (alternate version)

Dawn Twilight Lord, better known as "twilight L" (and yes, that is supposed to be spelled with a small t, and she KNOWS if you get it wrong) is a friend of Chibi-Dina, a catgirl, and a gamer... which suits her well because she is also a living video game character whose physiology reflects her video game nature. When not doing video game stuff she's almost as prone as Chibi-Dina to ending up as someone's hypno-victim, but she doesn't seem to mind either. (The character is on loan from the real-life twilight L, and all her appearances on this site are with her permission.).
-
Notable appearances: Chibi-Dina Does the Solaris Meme, Kaa's Complaint, Chibi-Dina's One-Two Shots, Chibi-Dina's Hypnoween. The RL version also has her own Twitch and Youtube channels.

Zaynah is a genie. A proper one, with magical powers and wish-granting and everything, but don't go looking for her in a magic lamp or bottle. See, Zaynah is an Internet genie; she hangs out on the Internet and can be summoned through a phone app. While mostly helpful, Zaynah may not be as benevolent as she appears... the first three wishes are free, but if you want more wishes... it'll COST you. Recently she's taken to do character interviews.
-
Notable appearances: Genie Girl Chats.

Lynessa is a shapeshifting dragon from the Desert of Dreams. She's usually seen as a petite redheaded human girl. after a curse made her unable to stay in dragon shape for more than a few hours at a time, but she can still transform into her much bigger, firebreathing, flying dragon form when she needs to. Despite having gone through quite a few hardships. Lynessa is a sunny and cheerful person who is never down-hearted for long. She's also bit of a talkative loon and will ramble on about any subject if you let her.
-
Notable appearances: Genie Girl Chats, Lynessa's Hypnotic Experiences, Knights of the Dina Table.

Amelia Redwood -- "Amy" to her friends -- is a witch for hire, who helps people out with magical solutions for various problems. Her specialties are potions and transformations, but she has a number of other impressive tricks in her arsenal. While undeniably a brilliant mind and a powerful witch, Amy can get caught up in her convoluted plans and complex magics that she'll forget her morals... and if a problem has a simple, obvious, non-magical solution, Amy will most likely miss it because she's too busy thinking up a complex, magical one.
-
Notable appearances: Knights of the Dina Table.

Chance (most people don't know if this is his first name or his last name) is a techno-mage, an alchemist, and a bit of a cynic. He's less brilliant, but has a good deal more common sense than, Amy --- with whom he's had a bit of a "best frenemies with benefits" relationship with ever since they attended magic university together. Chance and Amy are always trying to trick and one-up each other (usually in erotic ways), but when the chips are down they have each other's backs. Among other things, Amy is one of the few people who knows Chance's full name and backstory.
-
Notable appearances: Knights of the Dina table.