Skip to content
Stories of Desire II: Villains of Desire - The Art of Dina M 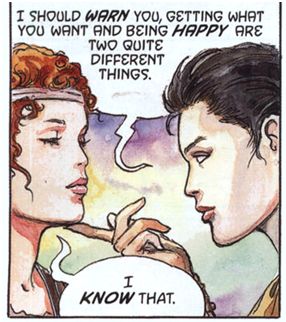 These titles look very sexual, don’t they? Especially since I keep illustrating them with pictures of Desire, as drawn by Milo Manara. Oh well.

Last time I wrote about how I had concluded that desire was the key component in storytelling and that if your characters don’t WANT anything, it’s a lousy story. In a follow-up comment I mentioned how it was extra important that the villains of a story have a desire… because that ties into motivation, and motivation can make or break a villain. Because a villain with no desires or goals is DULL… especially those villains that the creators foolishly try to describe as “an unstoppable force of nature” or some rot like that.

A hurricane or an earthquake or a raging fire is a force of nature. In a story, either of them might be good obstacles or challenges for a hero, and can lead to thrilling action sequences or drama, but you wouldn’t want to cast it as the hero’s arch-enemy. Going back to “The Wonderful Wizard of Oz” … I’m pretty sure L. Frank Baum never considered making the cyclone that takes Dorothy to Oz the main villain of the story. For all its destructive nature, and the major events it kicks off, the cyclone is a plot device and little else. It’s dangerous, but it’s not a villain. It’s not even a character, and it certainly doesn’t want anything.

The Wicked Witch of the West, however, is a great villain, and a clear character… and she has a clear desire: She wants Dorothy’s shoes, which are extremely powerful. It’s not a coincidence that she, and not the cyclone, is now considered an iconic villain. (Of course, in the book the Witch only actually appears in one single chapter, and is not as intimidating or as scary as the Witch from the famous MGM movie… On the whole I think the book is a lot better than the movie, but the Witch is one of the VERY few things that the movie actually does better.)

Villains, more than any other characters, need desires. They need goals and motivations, and you need to have a clear idea of what they’ll gain, or at least what they think they’ll gain, by doing the evil things they do. It can be something completely basic, like just wanting power, or respect, or just a good time — or it can be something more complex, like trying to please an unpleasable father figure, or compensating for his own perceived or genuine weaknesses.

For a very good example of how motivations can make or break a villain, I thought we’d take a look at the Shredder, from the Ninja Turtles franchise. See, Shredder, in his very many incarnations, is a villain who’s had many different origins, goals and desires… some of which worked and some of which did not. Personally I never thought he was particularly interesting… in the original black-and-white comic book he was just the “starter villain” and was killed off in the very first issue. It was the first Ninja Turtles cartoon that made him the Turtles’ main villain and made him THE bad guy for the Turtles to fight.

But if you look at the three Turtles cartoons out there…. for the moment ignoring the upcoming “Rise of the TMNT,” since I don’t know much about that one yet….  and the different incarnations of Shredder, you see something interesting: Two of three Shredders have very clear desires and goals, while the third one does not.

If you look at the very first cartoon, from the late 80s/early 90s, that version of Shredder has often been mocked and dismissed as a total buffoon; not really all that threatening and occasionally more comic relief than villain. But he has a very clear, very simple motivation: Basic greed. He wants what he DOESN’T have — power, wealth, respect, the world — and is willing to do anything to get it. It’s simple, but it’s effective, and it fits this Shredder’s status as a somewhat childish half-parody of the “evil overlord” supervillain. I don’t think it’s a coincidence that this Shredder, goofy though he be, was the one that really made the character the iconic villain he is today.

Contrast this to the Shredder from the second cartoon from 2003. He’s received some praise for being a much more threatening, serious and competent villain; he’s a genuine threat and every time the Turtles fight him they have to seriously up their game because he’s DANGEROUS. However, this Shredder is barely a character at all. He has no motivation, no goals, he doesn’t want anything. Nothing seems to please him or give him joy; we never get any idea why he’s doing what he does. He’s evil because he does evil things, and he does evil things because he’s evil. This Shredder, while a challenging obstacle for the heroes, is TERRIBLY boring as a character.

And then we have the Shredder from the CGI cartoon on Nickelodeon, that started in 2012 and concluded last year. This Shredder too is presented as a serious and formidable threat, but unlike the Shredder from the 2003 cartoon, he actually has a motivation: This Shredder wants REVENGE. He has it out for Hamato Yoshi: Yoshi “took away everything precious to me” when he got with the girl Shredder was interested in, and Shredder responded by systematically trying to ruin Yoshi’s life and take away everything precious to HIM. Except no matter what it took away it was never enough; Yoshi was never crushed thoroughly enough, never so broken as Shredder wanted him to be. This Shredder is a pretty interesting study in obsession as he willingly sacrifices everything and anything just to FINALLY have his desire for complete and total revenge fulfilled. In my opinion, this Shredder is by far the best incarnation of the character.

I think the three Shredders make for a pretty good look on different villain motivations and what makes a successful villain.

A Game of Wanda and Trans Representation