Skip to content
Dina Recommends: Jem and the Holograms (IDW) - The Art of Dina M

Hello, and welcome to Dina Recommends, the series where Dina (that’s me) talks about various media she likes that she thinks deserves more general recognition and respect. Today, I’m gonna share with you the truly, truly, truly outrageous comic book series Jem and the Holograms, with its various spin-offs, from IDW publishing, which ran from 2015-2019, written by Kelly Thompson and initially drawn by the amazing Sophie Campbell. 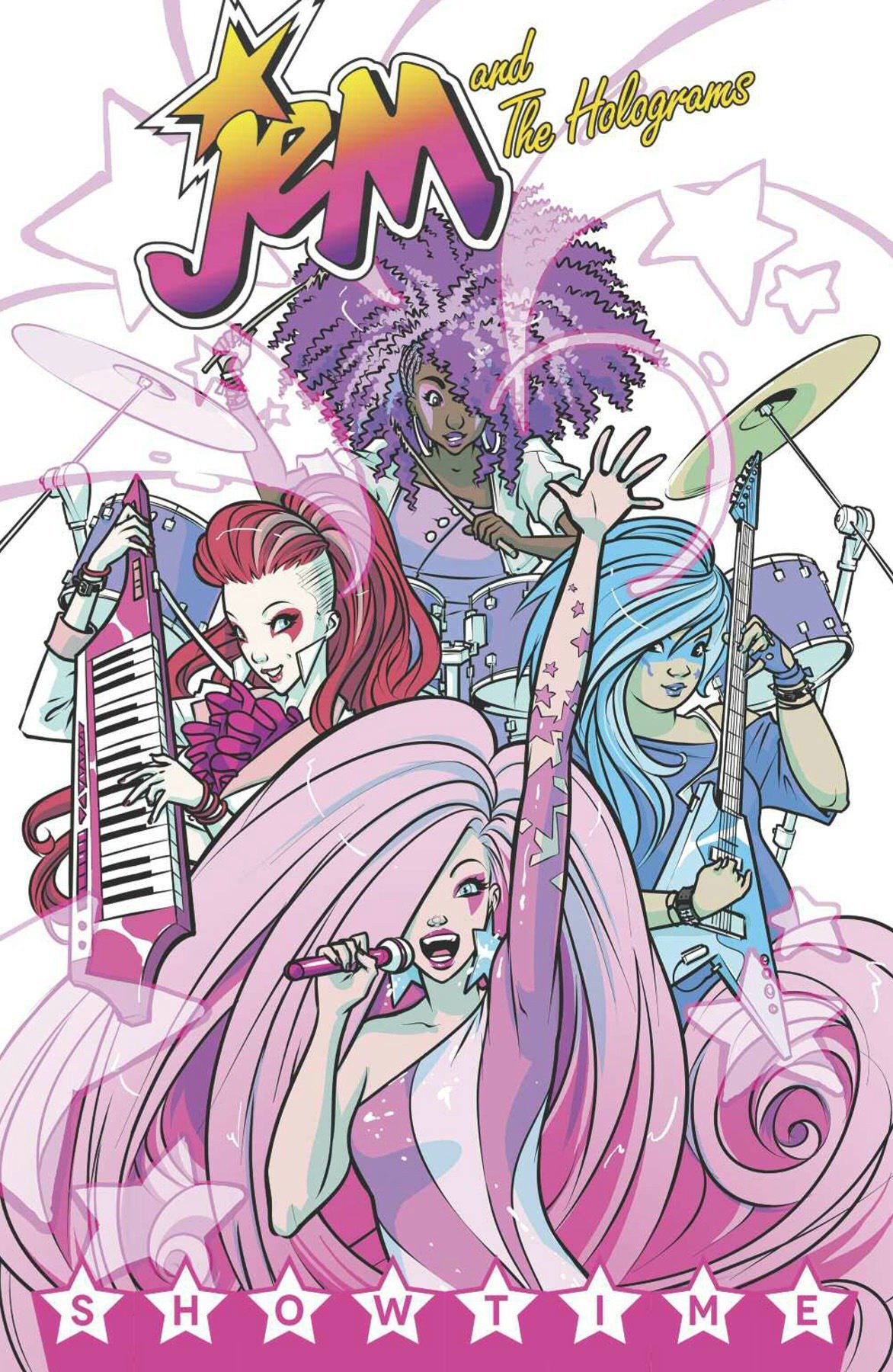 Now, for those of you who didn’t know Jem and the Holograms was originally a franchise from the 1980s, most famously a 65-episode TV cartoon simply titled Jem. Like most cartoons from the 1980s, Jem was essentially a glorified toy commercial (in this case for a series of Barbie-like dolls with a “rockstar” theme)…. and like most cartoons from the 1980s it suffered from some absolutely ATROCIOUS animation and some pretty bad writing. Like, you only had to watch some of the eps and note the cliched plots and lazy characterizations that often led to some rather nonsensical stories, to know that (with the possible exception of show creator Christy Marx, who really seems to have tried writing something good) on the whole the scriptwriters weren’t bringing their A-game to this.

But Jem did have quite a few things going for it as well. For one thing, it had genuinely clever and fascinating set-up. While it marketed itself as a “girl” cartoon with “glamour and glitter, fashion and fame,” it also had at least one leg firmly planted in the sci-fi genre, with hyper-advanced AIs and hologram tech being a vital part of the set-up, there were secret identities and sinister bad guys, and several episodes featured mad scientists, evil businesspeople, corporate espionage, kidnappings and mystery solving. It wasn’t animated well, and often it wasn’t written well, but DAMN this cartoon could get awesomely creative.

Of course, what people mostly remember Jem for is its music, which was insanely catchy and extremely plentiful. Every episode had like two or three music videos incorporated in the plot, original rock tunes sung either by Jem and the Holograms, or by their biggest rivals, the scene-stealing “bad girl” band, the Misfits. Several of these music vids, especially the Misfits ones, are just so much fun… my personal fave is We’re the Misfits in Hawaii, which is essentially one long complaint about how much the Misfits think Hawaii sucks, set to upbeat and catchy music, and with several poorly-animated slapstick scenes.

80s nostalgia was of course very much in in the 2010s, and has carried on to the 2020s, with lots of 80s franchises getting reboots and revivals. Jem and the Holograms got two: a really bad live-action movie that nobody liked, and which we’ll just ignore for the rest of this article, and a really good comic book series. And now, finally, we can talk about the comic that I’m recommending. Because while the comic obviously can’t have the catchy music, it takes everything else about the original cartoon and does it RIGHT. It’s almost insane how good these comics are.

Updating the setting from the 1980s to the 2010s, the comic introduces us to the four Benton sisters: Jerrica, Aja, Shana and Kimber. (If you wonder about the different skin tones, it’s simple: Jerrica and Kimber are biological sisters; Aja and Shana are adopted.) The four sisters are all talented musicians and dream of forming a four-sister rock band… but there’s one problem: Jerrica, who is the best singer of them and really would make the best lead singer, is also a shy nerd who suffers from overwhelming stagefright whenever she has to perform for anyone other than her sisters. She WANTS to be the lead singer, she’s GOOD at being the lead singer… but even in front of a minimal camera crew she totally freezes up. And that’s not really an advantage for a lead singer.

Luckily for Jerrica, and for the plot of the comic, the sisters discover that their late father, who was a scientist and a bit of a tech genius, managed to finish his greatest invention before he died: a super advanced AI named “Synergy,” with independent thought, an actual personality, and the ability to create hyper-realistic realtime holograms which basically means she can make anyone look and sound like anyone else. While the sisters are reluctant to reveal Synergy to the world (imagine her in the hands of bad people!), Jerrica sees a golden opportunity to get around her stagefright: using Synergy’s hologram disguise tech, she creates a new stage persona for herself… the tall, gorgeous, and extremely pink-haired glam rock star Jem.

As Jem, Jerrica’s stagefright vanishes because it’s not “really” her on the stage, and so, with only her sisters (and Synergy!) in on the secret she starts a double life as Jem the rock star, and Jerrica the band manager. And unlike most people with secret identities she has no problems with the two identities being seen together, because Synergy can just create a hologram to make it appear like they’re both present. So the band Jem and the Holograms is born, and the stage is set for lots of big crazy adventures with a sci-fi slant and with lots of intrigue!

And in the center of the intrigue is the rival band, the Misfits.

And OH MY GOD, are these girls hilarious. Just like in the old cartoon, they very quicky become the highlight of the comic and end up stealing pretty much every scene they’re in.

At first, at least, they come across as a mix of hardcore punkers and “queen bee” mean girls from a cliched high school film (despite all of them being in their early 20s), and they quickly develop a rivalry with Jem and the Holograms, which leads to lots of schemes and dirty tactics… and sets the stage for a real lesbian Romeo and Juliet situation when Kimber falls in love with the Misfits’ keytar player and songwriter Stormer, and the two start a relationship even while belonging to rival bands who REALLY don’t like each other.

(In the old cartoon, there was an episode featuring Kimber and Stormer leaving their respeective band and briefly becoming a duo, and while the ep never outright STATED that there was anything romantic going on because… it was the 1980s… there were a number of hints. And in the 2010s we can finally have open gay relationships! Yay!)

With this set-up, we get a mix of cartoony plots and soap-operaish plots; like Shana trying to decide between staying in the band or follow her dream as a fashion designer, the Misfits trying to sabotage the Holograms’ concert with hilarious consequences, the newest Misfit member Blaze coming out as a trans girl, Jerrica juggling her dual life and her developing relationship with boy reporter Rio who doesn’t know she’s Jem (in the cartoon this turned into a weird two person love triangle where Rio was flirting with both Jem and Jerrica without knowing they were the same person, but the comic sensibly cuts this part, making Rio a whole lot more likeable)…

…and a long storyline where Synergy gets corrupted, turns evil and tried to take over the world with mind-control music, enslaving both the Holograms and a number of their fans, turning them into gloomy and depressed Goth stereotype slaves, and the Misfits, who refuse to listen to Holograms music on principle. have to take on the role of heroes, help rescue the Holograms and save the day. It’s awesome.

Sadly, and apparently due to some issues with Hasbro, Jem and the Holograms got cancelled before its time. This did mean that a few of the plot threads were wrapped up a little too quickly and the ending of the sereis was… a little underwhelming.

Still, we did get 26 issues and a handful of specials, plus a five-issue Misfits series about the Misfits starring in a reality TV show, a short-lived sequel series called Jem Infinite that really took the sci-fi aspect of the comic and ran with it, and an even shorter-lived series called Jem Dimensions, which had a lot of standalone short stories… and a one-shot called Jem and the Holograms 20/20, which was released as part of the celebration of IDW’s 20th anniversary. Apart from Dimensions and 20/20, all the series were written by Kelly Thompson, with various artists at the helm.

And what we got, despite a few hiccups, was one of the single best 80s reboots ever. It was funny, it was exciting, it was VERY LGBTQ friendly and body positive, and it was everything the cartoon shoul

d have been, but couldn’t due to 1980s restrictions and limited budget.

And the Misfits were still awesome.