Skip to content
Garfield VS Pusur: A Tale of Translation - The Art of Dina M

Garfield VS Pusur: A Tale of Translation

Garfield! Say what you will about that fat, orange lasagna-loving cat (lots of people do!), but he IS one of the most famous cats in comics and cartoons.

But here in the Nordic countries, we don’t know him by that name. Denmark does use his original name, but the Swedes know him as “Gustaf,” in Finland he’s “Karvinen,” Iceland calls him “Grettir”… and here in Norway? Here in Norway he’s “Pusur.” 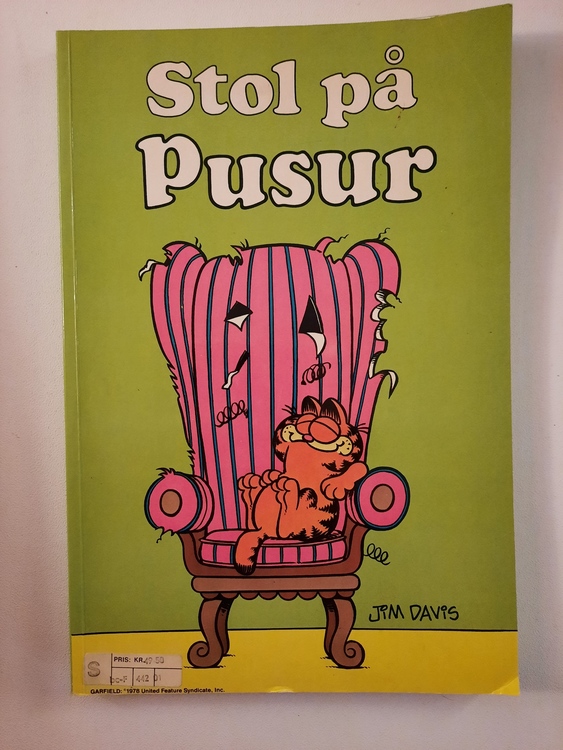 Not sure why they chose that name; the word “pus” means “kitty” in Norwegian, and “sur” means “grouchy,” so… maybe the name was meant to reference a grouchy kitty? I don’t know. It certainly isn’t a name I’ve heard anywhere else.

It was back in the 1980s when the Garfield comic strip first started running in a teen magazine called Det Nye. (The magazine still exists today, though it’s been purely digital since 2019, the target audience has long since changed from teens to women aged 18–25, and Garfield hasn’t been in the mag for years.) The translators were a duo of gentlemen named Jan Amunsen and Tore Kvil.

Now, Jan Amunsen was the main guy behind the fictional advice columnist “Søren Superstar,” who would answer reader’s questions every issue, in a rather flippant and cheeky way. And in those early years, Søren Superstar became like Garfield’s “host” in Norway; he was the guy who presented the cat to the Norwegian audience, and when the Garfield books with collected strips came to the Norwegian market, Søren Superstar always wrote a foreword to them, in his usuall crass and flippant way.

So of course Norwegian Garfield — or “Pusur,” as you remember — adopted the same crass, flippant way of speaking, with lots of creative slang and even mild swearing… plus (and this might come as a surprise) he also adopted a very left-leaning political position. Where the original Garfield mostly thought about eating and sleeping, the Norwegian Pusur was quite engaged in social debates, politics and had plenty to say about Norwegian society as a whole.

You see, Amundsen and Kvil kind of had almost the opposite goal with the comic than Jim Davis did. Where Jim Davis wanted the comic to be as international, timeless and general as possible, Amundsen and Kvil’s translation was specific, current and extremely localized. In other words, they essentially turned the strip into a satire on Norwegian culture, society and current events.

It wasn’t the most thorough or sophisticated satire. Pusur was still the the lazy, sarcastic glutton international audiences knew and loved, but compared to “Garfield,” “Pusur” was a lot more socially conscious and anti-establishment, taking on a sort of in-your-face attitude towards politicians and big coorperations.

To demonstrate, here’s one of the strips in the original English:

While the English version never specifies which newspaper Jon gets, in Norway he very specifically subscribes to “Klassekampen,” (“The Class Struggle”) a daily left-leaning newspaper. In this particular strip the Norwegian dialogue goes like this:

Jon: That’s a good kitty, fetching “Klassekampen” for me!
Pusur: Are you for or against Nicaragua, paid sick leave, women’s suffrage, Fred Olsen…
Jon: I WANT MY NEWSPAPER!
Pusur: Have an opinion!

As you can see, in the original Garfield just thinks about food; in the Norwegian version Pusur apparently reads the paper and gets overly engaged with the contents.

But possibly my fave is this one. It has nothing to do with newspapers, but I loved it… here’s the English version:

In the Norwegian version, Pusur concludes that the glasses must belong to Hans Bratterud, who was an infamous anti-gay preacher who got a bit of criticism in the 80s for his hatred of gay people and his insistence that beating children wasn’t a big deal.

But, perhaps one of the most interesting things was the change of Garfield’s fave food.

Everyone knows that Garfield loves lasagna. But apparently in the 1980s lasagna wasn’t that big in Norway… and remember, Amunsen and Kvil wanted Pusur to be as Norwegian as possible. So of course, he couldn’t be eating lasagna. They had to find something else for him to eat.

It would have been easy enough to change the lasagna to fish gratin, which WAS very well known in Norway, and it would have made some sense for a cat to like gratinated fish… but of course, then the joke would vanish, since part of the POINT with Garfield liking lasagna is that lasagna is kind of the last thing you’d expect a cat to be interested in. So Amunsen and Kvil found another solution… which is just as surreal.

What was Pusur’s fave food, if it wasn’t lasagna?

Are you ready for this?

Are you SURE you are ready?

Okay. Here it is:

What, you don’t know what joika is? I don’t blame you. It’s essentially a type of meatballs in a special sauce. They contain reindeer meat, which is why they have a Sami dude as its mascot (in Norway, only Sami or people of Sami descent are allowed to herd reindeer… and yes, Kristoff in Frozen IS Sami-inspired.)

Joika is Norway’s most popular type of meatballs… besides it’s a funny word to say. JOIKAAAA! (Nowadays, for reasons of “cultural appropriation,” they’ve decided to change the name to “Vilti,” which isn’t anywhere near as fun to say… but that happened in 2021, LONG after Amundsen & Kvil’s translation days.)

Now, you may have spotted the weakness here. Meatballs do not look a whole lot like lasagna. So how did Amundsen and Kvil solve this problem? Simple: Occasionally they just referred to the lasagna as “gratinated joika,” but more often they just referred to the lasagna as (ahem) “Beintråkka joika med stappe.” Which isn’t easy to translate to English, but would be something like foot-stomped joika with mashed potatoes.

No, as fas as I know, nobody in Norway insisted on eating joika that had been stomped on, even in the 1980s, but it may have been a reference to grape-stomping… or maybe a pun on the “untouched by human hands” slogan that apparently was popular back then? I don’t know.

“No joika here either!” says Pusur, though why he though he’d find joika underneath Jon’s eyelids is hard to say.

Now. Amundsen and Kvil kept translating Garfield as “Pusur” until sometime in the 1990s. I have vague memories of reading some of the books. Though in the 1990s, another publisher began translating the strip, and that translation was much more faithful to the original… it even kept the name “Garfield,” and kept lasagna as his fave food.

For some years, “Pusur” and “Garfield” were both available in Norway, as two separate translations of the same strip… the radicalized, satirical and very Norwegian Pusur, versus the more traditional, inoffensive and international Garfield.

Which is kind of a shame. I’m not old enough to have been there for the original Amundsen and Kvil translation, but it WAS a lot livelier and had a bit more “tooth” to it. You wouldn’t think Garfield and satire would be an effective combination, but… well, it worked surprisingly well, and I’m sad I was too young, or too unborn, to appreciate it in its heyday.

That said…. the more in-your-face, satirical Pusur DID make a surprising comeback in the 2000s, with the live-action Garfield movies. Yeah, you remember those movies, right? They came to Norway too, and because they were kids’ movies they were dubbed to Norwegian. (We ONLY dub kids’ movies in this country; adults are expected to be able to read subtitles!) And we all know how bad they were, and how Bill Murray’s performance as Garfield was just… not very good.

But in Norway. Pusur was voiced by actor Dennis Storhøi, who not only delivered a much livelier performance, but peppered his speech with slang, bad impressions and pop culture references, not a million mile away from the old satirical Pusur under Amunsen and Kvil. The movies still weren’t GOOD, but at least Pusur was being a lot more entertaining with his quips.

So who knows? Maybe one day we’ll see the return of Pusur, the Social Satirist.

The Disney Princesses of Wreck-It Ralph 2