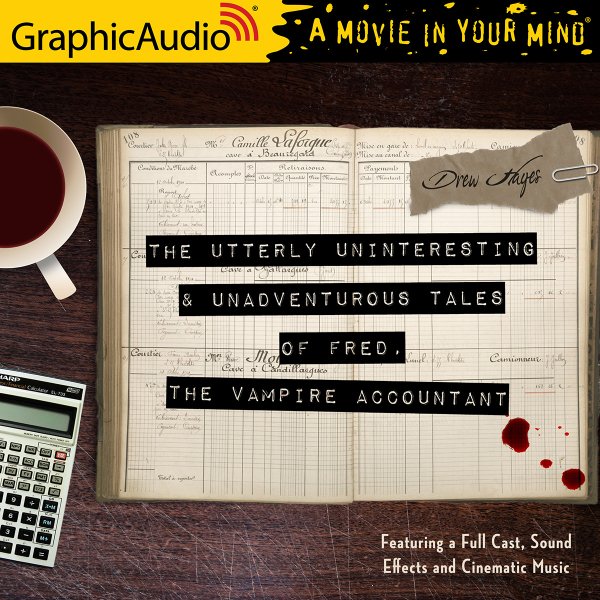 I’d been meaning to check out the Fred the Vampire Accountant books by Drew Hayes for a while… after all, I really liked his Super Powereds series (I even wrote a Dina Recommends post about it!). So when I found out that Graphic Audio had released their adaptations of the first six books, that was the final incentive.
If you don’t know Graphic Audio, they basically make what’s kind of a cross between audio dramas and full cast audiobooks. I first found out about them when I found and utterly adored their adaptation of Ms Marvel; No Normal, starring Shanta Parasuraman as Kamala Khan. (If I ever managed to convince any of you to check out Audible’s Sandman adaptation, you’ll probably recognize the format.) Since then they’ve kind of been on my radar, and when they released their adaptation of the first Super Powereds book, I discovered what a winning combination Drew Hayes and Graphic Audio was.
See, I really like Drew Hayes as an author, but since many of his stories started out as web serials, he has this tendency to get long-winded and repetitive. And yes, I get the irony of ME accusing other writers of being longwinded. But the GA adaptation of that first Super Powereds cut a lot of excess fat and presented a more streamlined, more to-the-point experience… but without sacrificing  the quirky dialogue and the character interactions that I always found to be he highlight of Drew Hayes’s writing.
Since I haven’t read the original books, I can’t say for sure if the Fred the Vampire Accountant series is the same, but the Graphic Audio adaptations (of which I have now heard the first two) do have a similar vibe and feel.
Fred, then, is a vampire accountant. When he was a human, he was a timid, cowardly socially awkward nerd with a head for numbers, who worked a boring office job… and now he’s a timid, cowardly and socially awkward VAMPIRE nerd with a head for numbers who works a boring office job. The only thing that’s really changed, at least in his own mind, is that he now avoids the sun and his diet is mostly liquid.
At least that’s how it starts. In the beginning of the first book, when he’s been a vampire for a couple of years. he attends a high school reunion and ends up getting in contact with a lot of other supernatural people; werewolves, wizards, dragons and monster hunters. As he gets more involved in the “parahuman” society, his life definitely takes a turn for the more interesting. He gets a girlfriend named Krystal, who’s a monster hunter; an assistant named Andrew, who’s an adorably cheerful teenage zombie; and (possibly my fave char in the first two books) a friend named Bubba, who’s a badass gay trucker who just also happens to be a werepony. And that’s just the start of it.
I was surprised to find that the Fred, the Vampire Accountant books aren’t really novels; more like series of short stories… or maybe “episodes” is a better word. They’re structured kind of like a TV series with an episodic nature but an ongoing metastory… each episode has its standalone plot with its own conflict and resolution, but they’re set in a definite chronology with  recurring characters and plot threads. The Graphic Audio versions got a little confusing at first since there are no clear dividers between “episodes,” but I got used to it after a while.
I’ve heard people dismiss the Fred books as a “male nerd fantasy.” Mm… I can see where they’re coming from… boring male geek becomes a powerful vampire and gets a hot girlfriend… but as male nerd fantasies go this might just be one of the CUTEST ones I’ve ever encountered. And I mean that as a compliment. A lot of traditional male nerd fantasies come across as rather petty and entitled, often with a big misogynistic streak and a side-order of self-righteousness. I didn’t really get this from Fred the Vampire Accountant.
Sure, Fred’s your classic “bullied at school” geek who gets (mainly through no effort of his own) great powers and kind of stumbles into a relationship with a hot girl while earning the respect of many important people in the community… but the thing is, unlike 90% of these nerd fantasies it is set up in a way that makes sense, and doesn’t really go overboard with anything. Though Fred is the protagonist of these stories, he remains a bit player in the world he ends up in; he doesn’t become the super-special Chosen One that everything revolves around. If anything, he’s more a supporting presence to the plots and problems of the other characters… he becomes important to them partly because he’s an accountant and “do you know how hard it is to find a parahuman accountant?”
Even Krystal, who seems to be trying to tick off as many “perfect fantasy girlfriend” boxes as possible, manages to be far less wearisome than I usually find characters like that, and her relationship with Fred read as cute rather than annoying. It probably helps that she’s established straight away as a high school friend of Fred’s, so they already have a positive history, and the romantic tension is almost completely skipped over… plus, Krystal has her own life and her own agency as a monster hunter, meaning that Fred is usually the one who plays a supporting role in her stories, rather than the other way around.
Overall, I’ve enjoyed this. The characters are sometimes a little stereotypical (especially the female ones), but they have heart. Not a huge classic, but a fun and easy listen. Not all male nerd fantasies are bad!